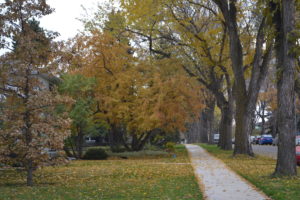 Lovely elm trees canopy the streets of Allendale, while kids play in the park or head to school.  The community is home to Allendale Junior High. Elementary schools (including Parkallen Elementary and Our Lady of Mount Carmel Elementary/Junior High) operate in each of the neighbouring communities.

The eastern boundary is the commercial strip of Calgary Trail; however, there are some excellent local stores within the neighbourhood on 106 Street. Make sure check them out!

The population of Allendale is just under 3,000, with a dynamic split between longtime residents, new families, and renters (often university students).  Located halfway between Whyte Avenue and Southgate Centre, residents have easy and convenient access not only to Whyte Avenue, but also the University of Alberta, the Saville Centre, South Campus and downtown Edmonton. The nearest LRT station to Allendale is South Campus Station. Allendale is also home to the CASA Centre and several faith-based buildings.

The land was originally owned by the Allen family at the turn of the twentieth century, before being annexed by the City of Strathcona in 1907.  It became part of Edmonton when the Cities of Strathcona and Edmonton amalgamated in 1912. Development in the area started prior to the First World War, but increased significantly during the late 1940s and early 1950s. The majority of houses built in this post-war period were bungalows which remained the norm for over 70 years; however Allendale is now transitioning to modern two-storey homes, duplexes and small multi-family complexes.

Allendale is located in the following: